This article was originally published in The Orca on November 13, 2020.

The 2020 provincial election in BC is over – and now the post-mortem begins. There’s a lot to examine.

Bottom line up front: to be competitive in a 2024 election, the next leader of the BC Liberal Party will need to take rebuilding, renewing, and diversifying very, very seriously. This was clear in the last leadership race, but the party failed to do it. Badly.

What gets measured gets managed, so let’s look at the data.

In a previous Orca article, I busted the persistent myth that young people don’t vote.

Millennials are now the largest cohort of potential voters in BC (and in Canada). With the voter turnout gap closing at the same as the raw number of older voters declines, under-40 voters are an increasingly powerful block that we ignore at our peril. 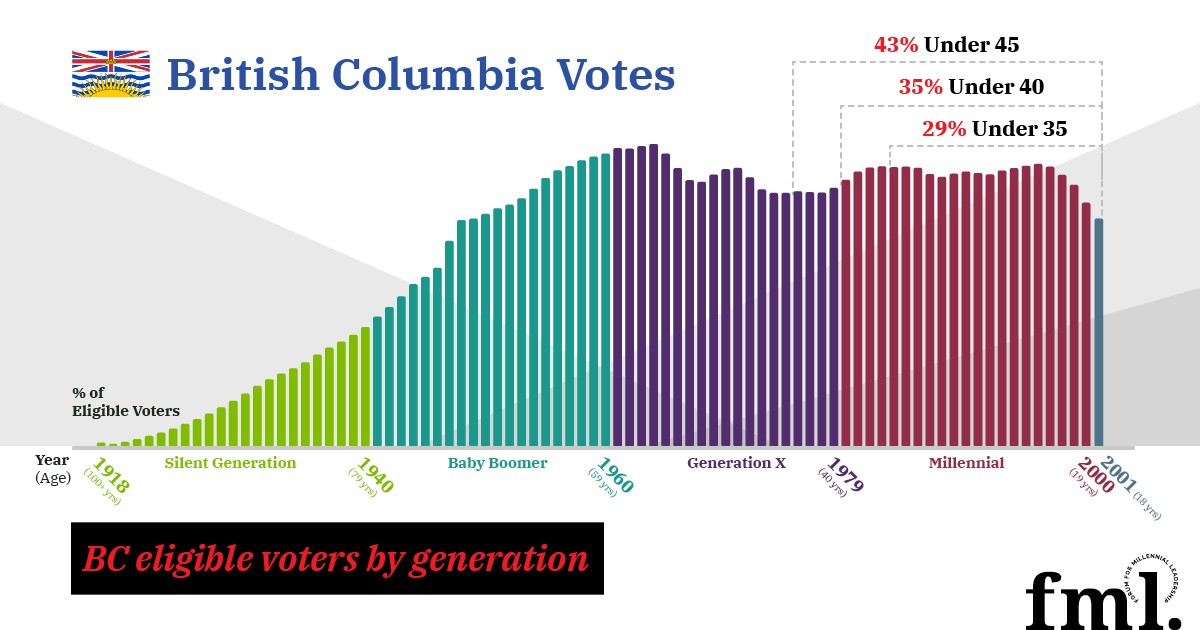 Metro Vancouver and the Fraser Valley are full of young, diverse working people and families who increasingly combine pocketbook concerns like affordability and jobs with more “cosmopolitan” values around environmental and social issues.

If a party can’t find a way to speak to both areas, they won’t get those votes. Period.

Just how young and multicultural is the Lower Mainland/Fraser Valley electoral battleground? Canada’s Millennials, the oldest of whom turn 40 this year, are heavily clustered in urban and suburban areas like Metro Vancouver, but increasingly also spreading elsewhere in BC, seeking opportunity and affordability (or escaping unaffordability). This has rapidly changed the demographic mix in many electoral districts. COVID-19 is expected to accelerate this even more.

For a multicultural picture of the region, as of the 2016 census, Canada as a whole was 22.3% visible minority; in Metro Vancouver that number was 48.9%, with 44.7% being first generation immigrants. Coquitlam, Vancouver, Surrey, Burnaby, and Richmond were all more than 50% visible minority. Do any of those cities sound electorally significant?

Young and diverse Canadians expect to see themselves reflected in political parties that seek their support. This is no longer a “nice to do,” but an electoral necessity. In marketing terms, it’s a qualifier, not a differentiator. A perceived absence of representation or aligned values can quickly become a disqualifier.

Yet, somehow, we seem to have gone backward in BC. Or, heck, let’s just name the problem: the BC Liberal Party took a huge step backwards in this election when it came to diversity and inclusion.

Let’s look at the numbers, starting with the generational breakdown of candidates. 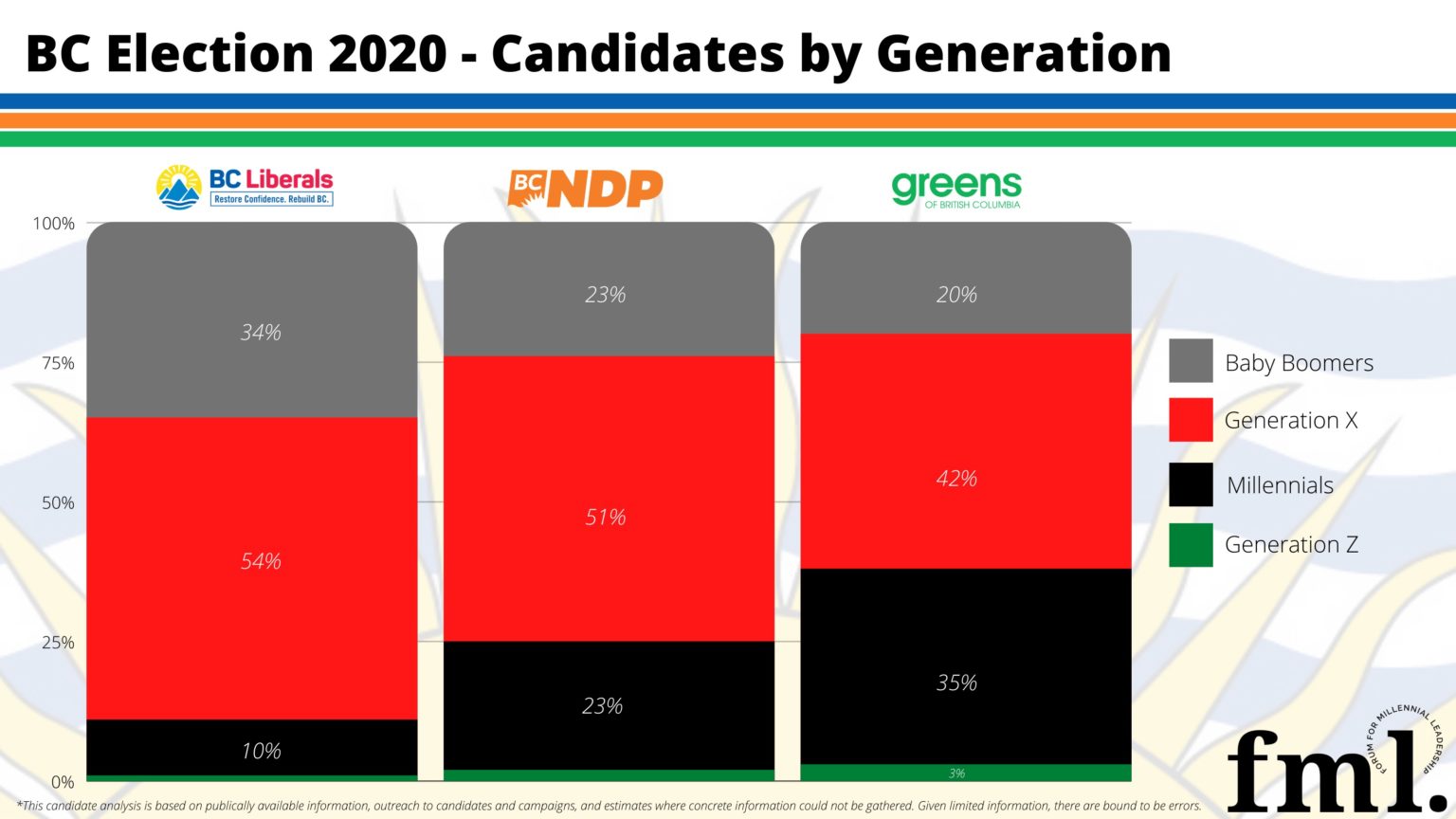 Out of 87 BC Liberal candidates, just 10 were under 40. That’s nine Millennials and one Generation Z candidate. Out of those 10 candidates under 40, only one was a woman. And let’s be realistic for a minute: even in a good election cycle, only two or three of those 10 valiant young candidates were running in ridings where they had any chance whatsoever. The folks who recruited them knew that, even if they didn’t.

Political strategists also know securing the support of women and families in the Lower Mainland is critical to winning elections in BC. Yet, less than a third of BC Liberal candidates were female. Out of 20 BC Liberal candidates in Vancouver and Surrey, there was just one female – incumbent Stephanie Cadieux in Surrey South.

All in all, this lack of diversity did not go unnoticed. This was a glaring step backward from the level of effort in 2017, as Charlie Smith pointed out in the Georgia Straight.

Now, I have tremendous respect for any candidate from any party who puts their name on a ballot, especially in a riding they’re unlikely to win. I did it myself in one of the safest NDP ridings in British Columbia, Vancouver Mount Pleasant.

But it’s also important to acknowledge that it’s not just about who you run, it’s where you run them. When they recruit candidates, parties know which ridings are within reach, and the choices they make reflect who they take seriously.

Fast forward to election night. Lo and behold, our party’s failure to run a young, diverse slate of candidates had even worse consequences once the votes were counted. The lack of diversity was amplified. 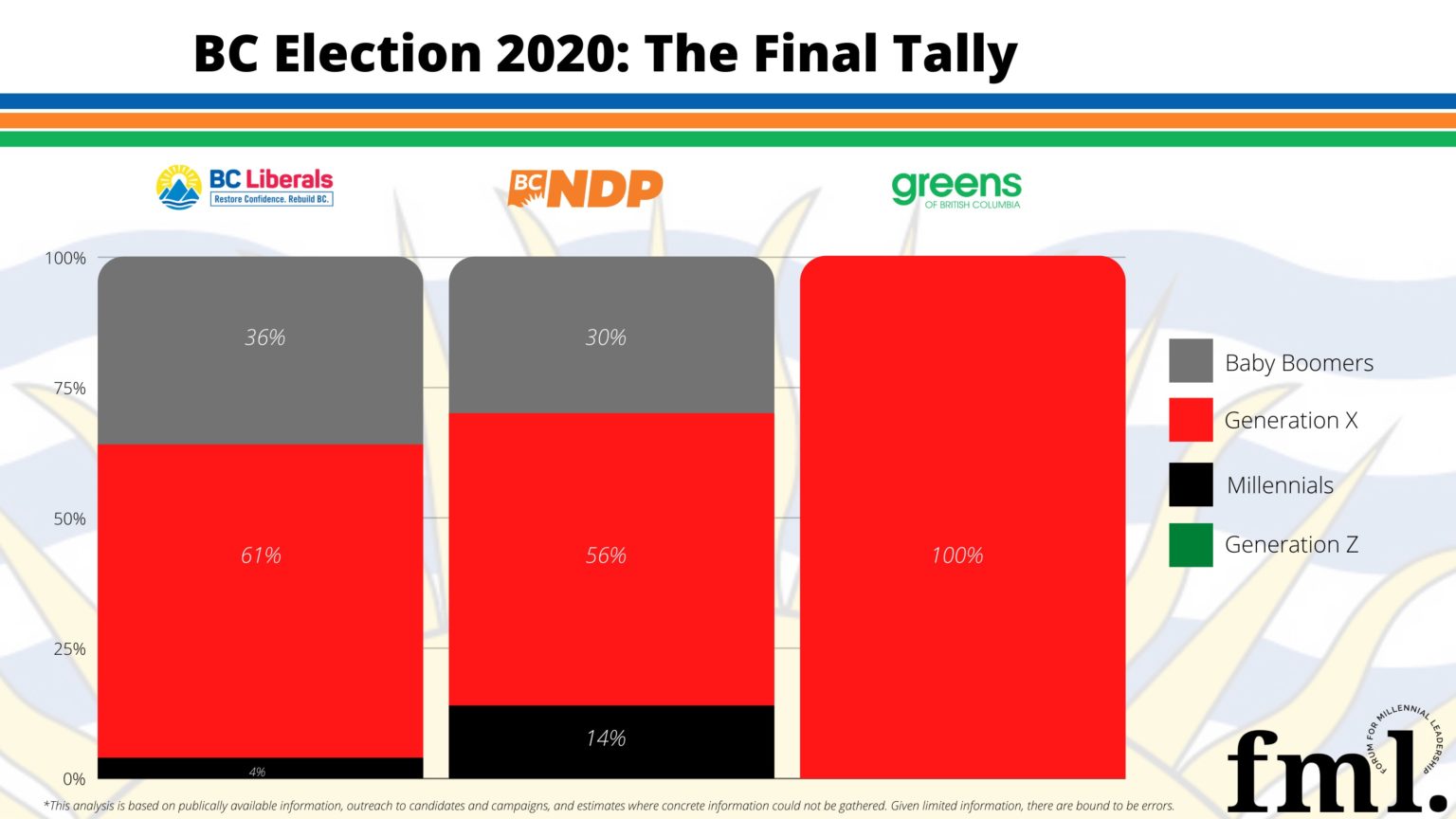 Although a handful of new MLAs were elected and some seasoned hands held onto their seats, the BC Liberal results sent a dire signal in terms of the party’s ability to reach out to all of BC.

Out of a caucus of 28, the BC Liberal Party elected just one person under 40, or 4% of their MLAs. By comparison to its federal cousins, 15% of the federal Liberal caucus and 16% of the federal Conservative caucus are under 40.

The BC Liberals elected three visible minority MLAs, and 7 women – just 25% of the caucus. They have not elected an openly LGBTQ+ MLA since Lorne Mayencourt stepped down in 2008, and two prominent MLAs with disabilities were defeated.

This cannot be attributed to electoral fate alone – it’s a function of active choices, and our party made some bad ones.

A study in contrasts: in 2017, the NDP elected 8 MLAs under 40. The BC Liberals elected none, and based on the “tideline” of ridings, could have formed a majority government without electing any. In 2020, the BC Liberals narrowly elected one young MLA, Trevor Halford, in Surrey White Rock. They ran one other under-40 candidate in a realistically winnable riding: Matt Pitcairn in Richmond Steveston.

For the next four years, I predict that a dozen young NDP MLAs will be thick on the ground engaging with stakeholders throughout the Lower Mainland, while the scarce BC Liberal MLAs in the Lower Mainland are run off their feet working to engage younger voters in dozens of formerly safe ridings.

So, what should the BC Liberal Party do about it? It starts with acknowledging that good intentions are not enough and undertaking some difficult but necessary conversations.

First, nobody should take seriously the face-saving pretence that the party did the hard work of renewal over the last three years. It didn’t, or it didn’t do nearly enough. Excuses about being forced to run 70% men because of a snap election didn’t pass muster with the media or the electorate, and they shouldn’t pass muster internally. Many suggested candidate recruitment start in earnest more than two years ago. Those suggestions were ignored.

Second, people thinking and talking about genuine renewal and modernization should focus not just on who’s running, but on who’s running in winnable seats. Recruiting young people and people of colour at the last minute to re-enact the Charge of the Light Brigade in unwinnable ridings is not a recipe for renewal.

Third, the BC Liberals need to figure out their language and approach around inclusion. We don’t need quotas to be inclusive. But leadership aspirants should expect to be asked what they’ll do to make the party more inclusive, and this time around they should be expected to provide substantial and committal answers, and to be held accountable.

Fourth, the BC Liberals should consider opportunities to inject renewal into their caucus and broader team before 2024, including through both provincial and municipal by-elections.

The opportunity was on the table in the most recent cycle, with numerous long-time MLAs indicating well in advance they didn’t intend to run again, including a number of ridings where by-election victories would have been relatively safe bets. Imagine the difference half a dozen new young and/or diverse MLAs might have made in Question Period, in the media, or out talking to stakeholders a year or two before the 2020 election.

Finally, generational renewal is not just about candidates. It’s about ideas, message, and tone, and leadership. Comparisons to the NDP government of the 1990s seldom resonate with voters born after 1980. It’s critically important that the BC Liberals find their footing and put themselves forward as a proactive party of the early 2020s, not a reactive party of the late 1990s or the early 2000s.

Tough medicine? Sure. But the patient is in pretty rough shape and the last doctor only made things worse. We need to do better.

Gavin Dew is a 36-year-old father and the founder of the Forum for Millennial Leadership, a non-partisan group working to engage and elect young Canadians.

...
Read more
Gavin Dew Says BC Liberals Need To Focus On ‘Winning For The Future, Not Dwelling On The Past’
May 27, 2021

If the BC Liberal Party is serious about renewal and broadening its appeal, it needs to stop living in the past, according to the party’s youngest...