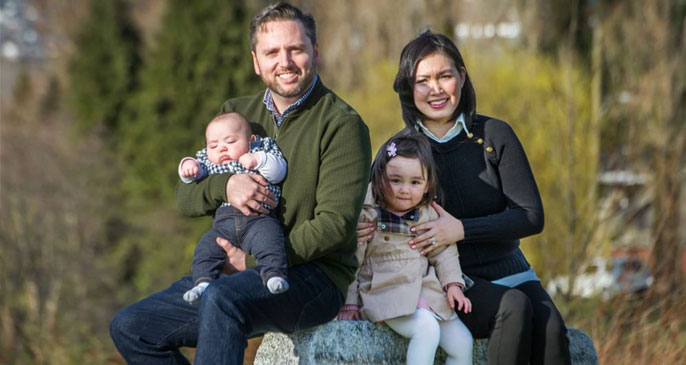 This article was originally published in the Vancouver Sun on March 30, 2021.

Gavin Dew, who has built his political profile by encouraging young people to run for public office regardless of party allegiance, has announced that he’s running to be the next leader of the B.C. Liberals.

Dew, a 37-year-old father of a two-and-a-half-year-old daughter and a four-month-old son, said he’s driven to run because he’s concerned about the lack of affordability facing B.C. families.

“Elections in B.C. are won and lost with young families,” he told Postmedia News. “And I don’t think we’ve been doing enough to reach out to young families who are struggling or who are deciding whether to build a life here or elsewhere.”

After the October election reduced the B.C. Liberals to just 28 seats, former leader Andrew Wilkinson faced criticism for being out of touch with everyday voters and for failing to quickly respond to homophobic and sexist comments by some Liberal candidates.

Dew ran for the B.C. Liberals during the February 2016 byelection in the NDP stronghold of Vancouver-Mount Pleasant, a race he lost to now-Tourism Minister Melanie Mark. He is also a former director of the Vancouver NPA and founder of the Forum for Millennial Leadership, a non-partisan group that helps elect millennials to various levels of government regardless of their party or ideology.

Dew worked on the leadership campaigns of Kevin Falcon in 2011 and Michael Lee in 2018, both of whom are likely contenders in this leadership race. Falcon, former finance minister under ex-B.C. Liberal premier Christy Clark, remains a front-runner in the race.

Dew said he has a lot of respect for the prospective candidates.

“If we get this right, this leadership race is the opportunity to showcase the breadth and depth of this party,” he said.

Dew and his wife Erin Shum live in East Vancouver and run a child care centre called Rain or Shine Child Care. Dew said he sees parallels between the complicated and opaque licensing process for daycares and the lengthy zoning approval process for new housing. Both processes, he said, are often stalled by bureaucratic red tape that drives up costs for families desperate for child care or looking to get into the housing market.

“It can take three or five years to approve building housing we all know we want. We need to work collaboratively with municipalities to make sure we have the right resources and processes to get to yes’,” Dew said. “If we can find ways to get more child care or more housing to market more efficiently at less cost with less delay, with less red tape, then we are solving our problem and we’re not just driving around dumping money out the back of a truck to do it.”

Dew, the son of a mining engineer who worked as a consultant for Kinder Morgan on the Trans Mountain pipeline expansion project between 2013 and 2015, said the party needs to bridge the “artificial divide” between the resource sector and environmentally sustainable initiatives. The B.C. Liberals, he said, must encourage green innovation and develop forward-thinking policies to win back environmental voters.

Dew would also like to see the party become more welcoming to women, young people, people from the LGBTQ community and people from diverse backgrounds, “and do so in a way that’s not about tokenism, not about quotas, but about truly building intercultural representation.”

The B.C. Liberal leader will be selected Feb. 5.

Skeena MLA Ellis Ross, a former chief of the Haisla Nation, was the first person to declare his leadership run, promising a campaign free of personal attacks.

Liberal MLAs Renee Merrifield and Tom Shypitka, and conservative social media influencer Aaron Gunn, have said they’re considering a bid for the leadership but none are ready to officially declare. Liberal MLAs Mike Morris and Mike Bernier have announced they won’t be running.