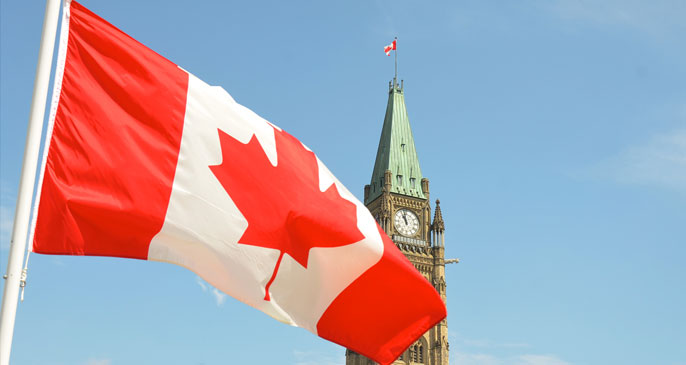 This article was originally published in The Orca on October 15, 2019.

The numbers are clear – Canadians want younger candidates. The question is how to recruit and elect them.

Millennials have the power to shape the 2019 federal election, at least in theory.

Between the 2011 and 2015 federal elections, turnout among voters under 35 increased by 1.2 million.

The consensus among pundits and pollsters and political wonks is that the surge in turnout among young voters was one of the key determinants of the 2015 election. Justin Trudeau rode to power on a cresting wave of millennial turnout – aided by a consolidation of progressive voters who wanted to defeat Stephen Harper.

Four years later, Canadian millennials have a new feather for their political cap. They have eclipsed the baby boomers as the largest generation of potential voters, with potential being the operative word.

Millennials, born roughly from 1980-2000, comprise 35% of the electorate across Canada. In key battlegrounds like Metro Vancouver and the Greater Toronto Area, they make up an even larger share of potential voters.

Whether millennials on balance support Justin Trudeau again, cast different votes, or don’t show up at all will have a potentially decisive impact on the election outcome.

Now that we’ve covered off the conventional wisdom, let’s dig deep into three interesting dynamics in Canada’s intergenerational politics, using research and polling commissioned by the non-partisan Forum for Millennial Leadership (FML), an organization that supports electing millennials regardless of party, ideology, or level of government.

Few political observers would argue that Canada’s mainstream political parties are pushing their efforts to court younger voters into overdrive. Everyone has something to say about how to address housing, transportation, and affordability. Given the more liberal social values of many millennials, climate change and social issues have been mobilized as potent wedge issues.

It is difficult not to conclude, however, that parties across the spectrum are attempting to define themselves largely by what they are not. They are trying to build confidence in their own leadership by eradicating it, both in their rival leaders, and the political system as a whole.

It’s a race to the bottom, and not it’s not exactly inspiring to watch.

Perhaps unsurprisingly, younger voters aren’t buying it, and it’s certainly not inspiring much hope. Despite each party’s different appeals, only 39% of 18-34 year olds believe that “politicians care about my generation.” In fairness, the numbers on that question are no better among older Canadians, so perhaps the takeaway is that nobody has much confidence that politicians care about them, no matter how old they are.

In fact, 69% of Canadians say “politicians only care about the wealthy and the well-connected,” a sentiment that resonates with 73% of 18-34 year olds and maxes out at 82% of people who voted for the NDP in 2015. That explains why Jagmeet Singh is doubling down on populist messaging, clawing back traditional NDP voters who went to the Trudeau Liberals in 2015.

Speaking of youthful candidates, what should we make of the relationship between youth and electability?

Much depends on context. Objective age does not necessarily correlate with subjective youthfulness – perhaps a more important political attribute.

In 2015, 43-year-old Justin Trudeau was criticized by his opponents as inexperienced and “just not ready.” But when compared to Stephen Harper’s buttoned-down image and fellow grey-hair Thomas Mulcair, Trudeau’s relative youth and physical dynamism seemingly also added to his appeal for voters young and old looking for renewal and change, and youthful optimism.

Has Trudeau’s shine faded? When asked which party leader most possessed a range of different attributes, Canadians found Trudeau and Scheer to be roughly equal on “dry” attributes such as competence, trustworthiness, alignment with personal values, and best policy platform.

The Trudeau brand, especially for young and socially progressive voters, has always been heavy on virtue; in those areas the Prime Minister appears to have incurred significant damage. He scores evenly with Andrew Scheer at 27% for the most racist party leader, with Maxime Bernier well behind at 18% and Yves-François Blanchet at 16%. Even among those who voted Liberal in 2015, 18% selected Trudeau as the most racist leader.

Despite incurring significant damage on attributes that would seem to be prequalifiers for progressive vote switchers, Trudeau’s personal dynamism and physicality continue to help him defy the objective youth of his opponents. Liberals strategists know this; hence his penchant for hiking, canoeing, boxing, and taking his shirt off. In general, it works.

Although he is 7 years older than Singh and Scheer, Canadians overwhelmingly (49%) chose Trudeau as the most youthful party leader – although, as we move from the oldest cohort of voters to the youngest, there is a significant tendency toward perceiving Jagmeet Singh as the most youthful. The Prime Minister may have come down to earth relative to his buoyant brand in 2015, but Canadians 18-34 years old are twice as likely to say that Trudeau (31%) cares about their generation as Andrew Scheer (15%). 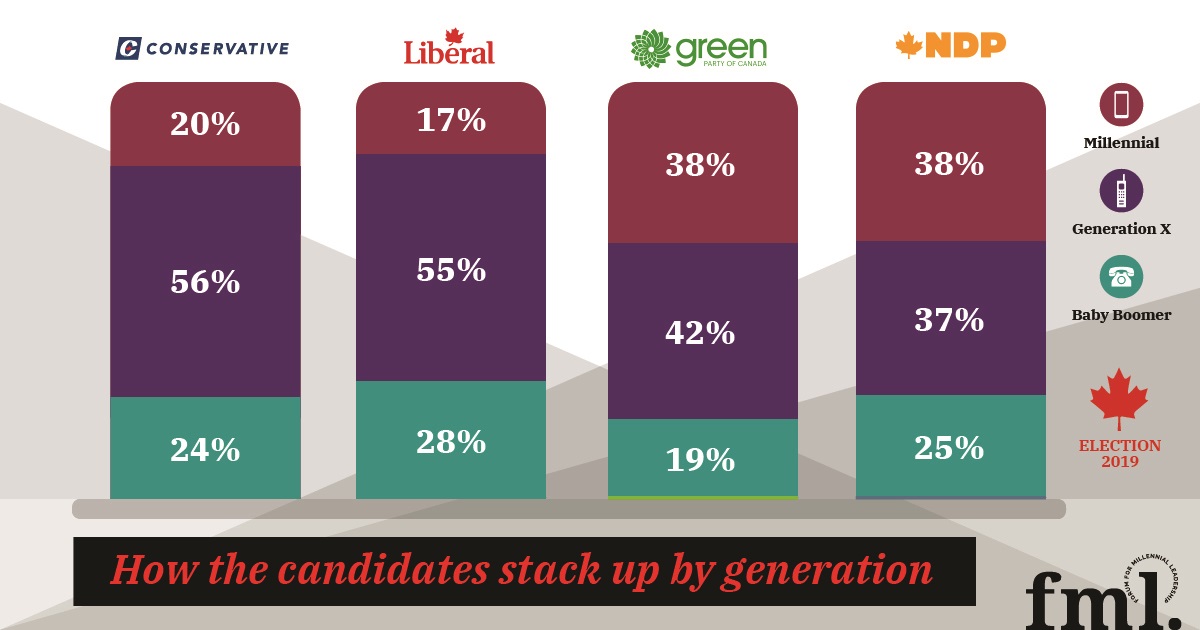 When asked which party has the most youthful candidates, Trudeau more than doubles any other leader, at 42%. On that front, we see the durable power of his enduring halo of youthfulness, which propels his party’s perceived youthfulness ahead of several slates of candidates that are in fact younger.

This begs a few questions: does selecting a leader perceived as youthful ultimately accelerate or delay the generational renewal of a party? Does selecting a leader who is not perceived as youthful create an imperative to surround them with youthful candidates? What counts as youthful, to whom? What’s the right way to enable generational renewal without being beholden to a quota system – unless you’re into that kind of thing.

Some truisms about politics are undeniably true. One is that older voters are significantly more likely to vote, especially so in lower turnout elections.

Other assumptions are less true.

One is that younger candidates are just there to appeal to younger voters and fill out the slate by running in losing ridings.

There is no doubt that younger Canadians are impatiently awaiting their generation’s change to make their mark. Among 18-34 year olds, 69% say “it’s my generation’s turn to lead,” and 82% saying “it’s time for young people to step up and lead in politics.” 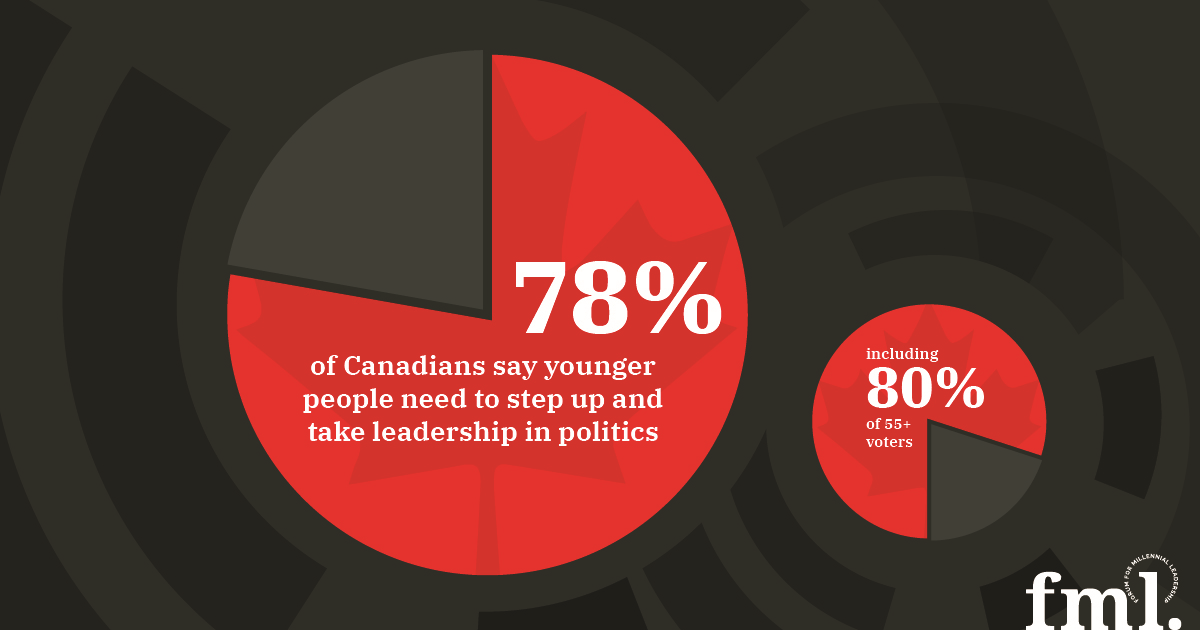 The missing half of the story is that it’s not just young voters who want to see youthful candidates and ultimately elected officials. 78% of Canadians – across gender, generations, geographic, and political leanings – agree that it’s time for younger people to step up and lead in politics.

Support exceeds 70% in every region of the country and among 2015 voters for every major political party, including 71% of Conservatives, 87% of Liberals, and 88% of NDP supporters. 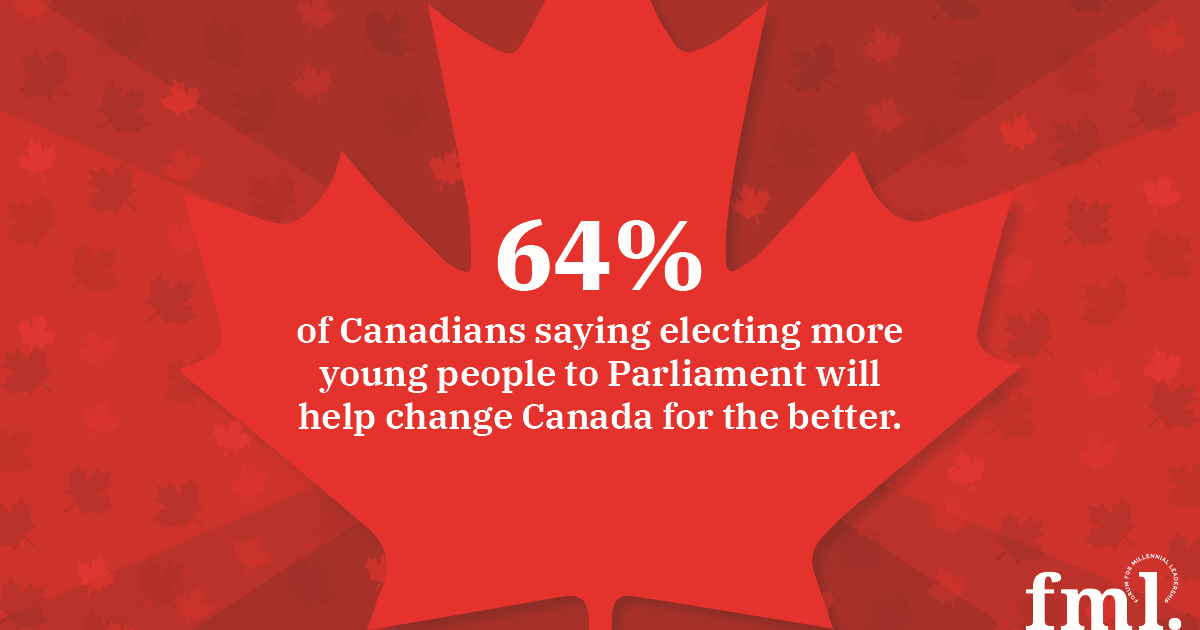 A majority (64%) of Canadians agree that “electing more young people to Parliament will help change Canada for the better.” Again, 55+ voters (62% agreement) are more likely to agree than 35-54 year olds (57% agreement). 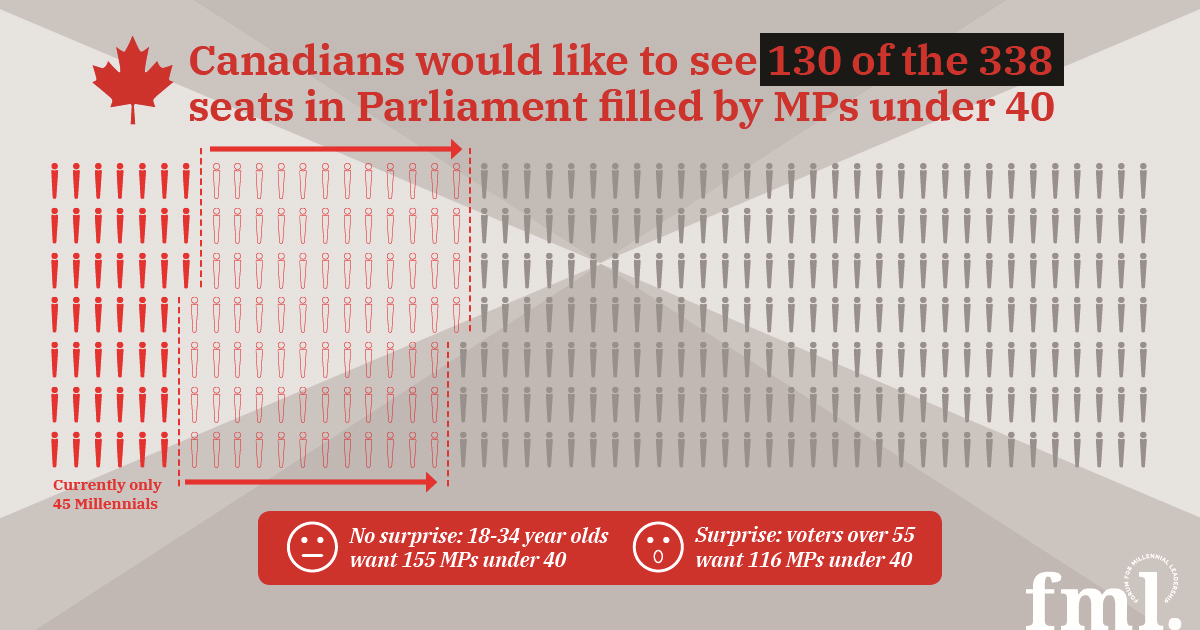 Millennials are now the largest generation in Canada, and 35% of the eligible voters. They’re clustered in electoral battlegrounds like Metro Vancouver and the GTA.

The growing power of millennials as a generation of potential voters is considerable, but the demand for credible younger candidates cuts across all generations. Anyone who thinks young (or youthful) candidates are optional is dead wrong.

What remains to be seen is whether and where that burgeoning electoral power translates into more millennials in Parliament.

Results are based on an online study conducted by Research Co on September 24 and 25, among 1,000 adults across Canada. The data has been statistically weighted according to Canadian census figures for age, gender and region in British Columbia. The margin of error—which measures sample variability—is +/- 3.1 percentage points, nineteen times out of twenty.